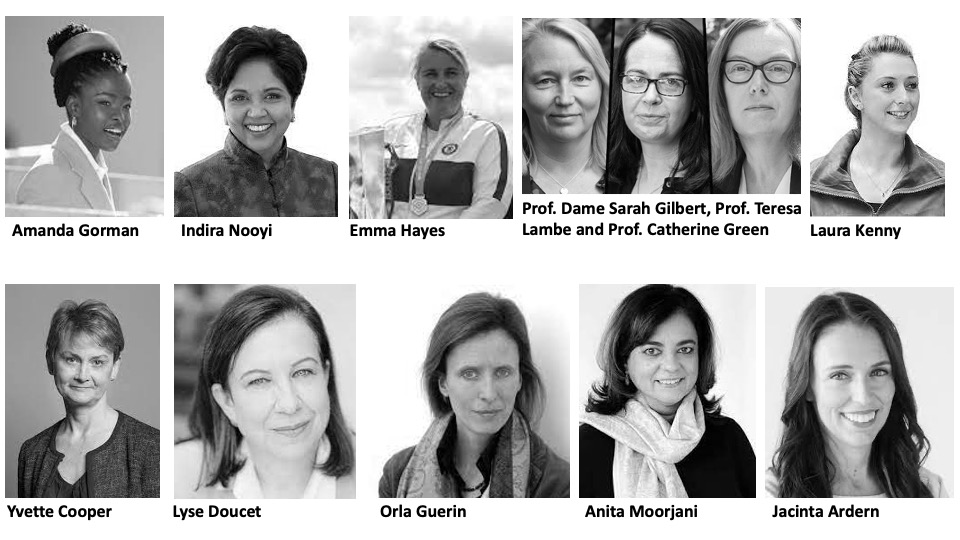 At Grace Blue we champion female talent in transformational leadership roles. Diversity, equality and inclusion sits at the very top of our agenda.

In celebration of International Women’s Day we want to reinforce our commitment to gender equality and pay tribute to all the brilliant female leaders around the world who have inspired us in the last 12 month. Many of the names are prominent, a few are more personal, either way we hope you will enjoy our homage to these amazing women …

Amanda Gorman, American poet and activist and the first person to be named National Youth Poet Laureate in the US. In 2021 she delivered her poem “The Hill We Climb” at the inauguration of US President Joe Biden. Her passion, her bravery, and her words have inspired a new generation of artists to embrace the power and beauty of language to change the world.

Indira Nooyi, business executive. When themes like diversity and inclusion were still unheard of, Indira, a woman of colour, born and raised in India, who famously owned only two pairs of business suits when she first started working, went on the become the CEO of PepsiCo. She broke numerous glass ceilings on her way up and has been on the top of Forbes and Fortune lists of most influential women in the world and in Business for many years.

Emma Hayes, an English professional football manager and currently the manager of FA WSL club Chelsea Women. She is recognised to be a brilliant manager and coach who has proven herself in a male dominated world. She has developed Chelsea into one of the world’s best teams and become a mother at the same time . She is incredibly respected in both worlds of men’s and women’s football and tipped to be the first female coach of a men’s top team.

Professor Dame Sarah Gilbert, Professor Teresa Lambe and Professor Catherine Green, researchers based at the University of Oxford and part of the seven scientists who developed the Astra Zeneca/Oxford Vaccine.

Laura Kenny, an English track and road cyclist. She is the most decorated female British Olympian ever. Winning gold and silver at the Tokyo Olympics means Kenny won her fifth Olympic title and became the first British woman to win gold at three consecutive Games.

Yvette Cooper, a British politician serving as Shadow Home Secretary since 2021, and previously from 2011 to 2015. She is clever, measured, dignified, deeply principled.

Lyse Doucet and Orla Guerin, two BBC foreign correspondents doing a dangerous job in incredibly difficult circumstances, particularly at the moment. They display great courage, skill and empathy all at the same time.

Anita Moorjani, a New York Times bestselling author and motivational speaker who has been featured on CNN, Fox, etc. She advocates self-care & living fearlessly, particularly relevant during these Covid times.

Jacinta Arden, Prime Minister of New Zealand. Since in office, she has led her country through an earthquake, a terrorist attack and Covid acting swiftly, decisively, effectively and with great empathy. She voluntarily took a 20% pay cut to “close the gap” between herself and those affected by COVID pay cuts. And to top this all up, she gave birth to her first child while in office.

Emma Raducanu, a British professional tennis player. She what she achieved at both Wimbledon and the US Open was inspirational. To have the mental fortitude to lift the US Open by winning 20 consecutive sets. Ranked outside the top 300, in 2021 she reached the fourth round in Wimbledon, her first major tournament. At the US Open two months later, Raducanu won her first Grand Slam title.