Grace Blue’s founder, Jay Haines, shares his views with Adage on why 2020 has seen such a high churn rate of C-level executives across the industry 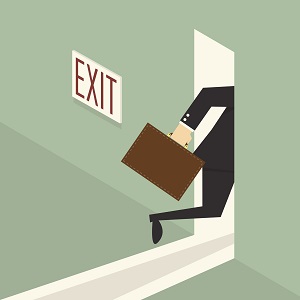 Earlier this week, TikTok CEO Kevin Mayer resigned after only three months in the job, driven to departure by the political storm that ensued after President Trump had ordered the ByteDance-owned social video app to sell its U.S. assets or shut down on American shores.

Although a three-month stretch is rare, Mayer joins a list of high-profile C-level executives who have left their positions in 2020 after serving only brief stints at their respective companies. While the reasons for these departures vary from company to company, the coronavirus pandemic, company reorganizations and the cultural uprising around racial injustice following the death of George Floyd have contributed to many of this year’s short tenures.

“We are now living in a world which can change overnight, as we have seen from the pandemic and the events that ensued. We hear from a lot of talent that they are no longer willing to wait out a situation that is not working for them. Similarly, companies cannot afford to retain staff who are not going to drive the business forward, so they are becoming more bullish on parting ways sooner rather than later.”

The average tenure of C-suite execs across industries continues to slip. A study from executive search and leadership advisory firm Spencer Stuart found that in 2019 the average tenure of a chief marketing officer was 41 months, down from 43 months is 2018.

Fast forward to 2020, and none of the following examples got anywhere close to that:

Having left HP to join Facebook in August 2018, the CMO Antonio Lucio announced this month that he is leaving the social network on Sept. 18. After a public brand boycott, trust issues in the political arena and emerging rivals, it’s clearly not an easy position to tackle. “It is a time for reckoning for the nation and my industry and it is time for me to play a more active part in accelerating change,” Lucio wrote in a Facebook post announcing his departure, in which he also said he would devote his remaining time to diversity and inclusion.

Time’s Up for Christina Pyle after just one year

In August, Christina Pyle left her role as the executive director of the Time’s Up Foundation about a year after taking up the position in June 2019. She has been named Dentsu Aegis Network’s first chief equity officer of the Americas. Pyle did not say why she decided to leave Time’s Up, but stated: “In spending time with the Dentsu team, it’s clear that this is a group of people who place the value of caring—for their people, their communities, their customers and each other—at the forefront of the decisions they make.”

Robert Greenblatt was named WarnerMedia Entertainment chairman in March 2019 as part of AT&T’s reorganization of WarnerMedia, following the telecommunications giant’s acquisition of Time Warner. However, when WarnerMedia CEO Jason Kilar joined the company in May 2020, Greenblatt became one of several casualties under the new management and in early August he left after only 17 months on the job, reported The New York Times.

General Motors lost its Chief Financial Officer Dhivya Suryadevara after only two years in the job when she made the move in August to payments platform Stripe Inc. Suryadevara is one of several CFOs leaving their jobs this year after the pandemic has forced businesses through a slow spring and summer to reassess their operating costs, the The Wall Street Journal reported.

In July, Nike lost its first-ever diversity and inclusion officer, Kellie Leonard, after only two years in the position. Leonard, an 18-year veteran with the company, announced she was leaving to “pursue other interests.” But in an internal memo obtained by the Financial Times, Nike CEO John Donahoe said the move was part of “a structural shift” to allow for “more meaningful change, focusing on equal access to opportunity for all.” Leonard was quickly replaced by Felicia Mayo, formerly Tesla’s head of diversity.

PayPal originally hired Allison Johnson, formerly VP of marketing communication at Apple, in January 2019 as its first CMO in six years with a goal to expand into more user products. But it wasn’t too long before PayPal decided to simplify the company’s global marketing department, according to Business Insider, and in May, Johnson left the company after only 18 months.

Kylie Jenner has had a rough year with her makeup line Kylie Cosmetics. In May, Forbes revoked its declaration that Jenner is the “youngest self-made billionaire,” writing that the company misled the publication about how much it actually makes. Forbes published a new critical article—”Inside Kylie Jenner’s Web of Lies—and Why She’s No Longer a Billionaire.” Less than a week later, cosmetics giant Coty (which owns about half of the company) announced that Kylie Cosmetics CEO Christoph Honnefelder would be stepping down, to be replaced by Simona Cattaneo, Coty’s president of luxury brands. In its announcement, Coty writes that Honnefelder gave his notice “a number of weeks ago.” Honnefelder had only been hired in January 2020, meaning he was in the job for less than five months.

In April, two weeks after the launch of Jeffrey Katzenberg’s $1.75 billion mobile streaming app Quibi, Megan Imbres, head of brand and content marketing, announced she was leaving after only a year in her role. Variety reported that Imbres stated in an internal memo that it was a “opportune time” to leave. The expensive app has received more negative reviews than anything, making exec exits unsurprising, and Imbres was the latest. “Is anyone watching Quibi?” asked a July Vulture article.

With the coronavirus pandemic wreaking havoc on business decisions, German software giant SAP decided to go with a single CEO, rather than two at the helm. Jennifer Morgan, who became co-CEO of SAP in October 2019 alongside Christian Klein, left in April 2020, after only six months ion the job. “More than ever, the current environment requires companies to take swift, determined action which is best supported by a very clear leadership structure,” SAP said in a statement to Agence France Presse.

Facing an extremely crowded market and a profit-sharing fight with franchisees, former McDonald’s marketer Emily Somers was hired as Domino’s first UK CMO in August 2019, but she left after only seven months, reported The Drum. Somers never gave a statement about why she left, and Domino’s has yet to replace her.

In January, before the pandemic took root in the U.S., Gap CEO Neil Fiske left after a just year and nine months, and CMO Alegra O’Hare also the company after only 11 months. The brand, which was struggling to reach consumers, had abandoned plans to spin off Old Navy at the time. A spokesperson told Ad Age that Gap would “redefine” the CMO role and in March, Gap hired Sonia Syngal, head of the Old Navy business, as its new CEO.

Alex Bogusky returned to CPB, but stayed for less than 18 months

Another flashback: At the beginning of the year, news broke that Crispin Porter Bogusky co-Founder Alex Bogusky would be leaving CPB again after returning for only 18 months. CPB Partner and Chairman Chuck Porter told Ad Age that Bogusky decided to depart to re-prioritize and focus more on family.