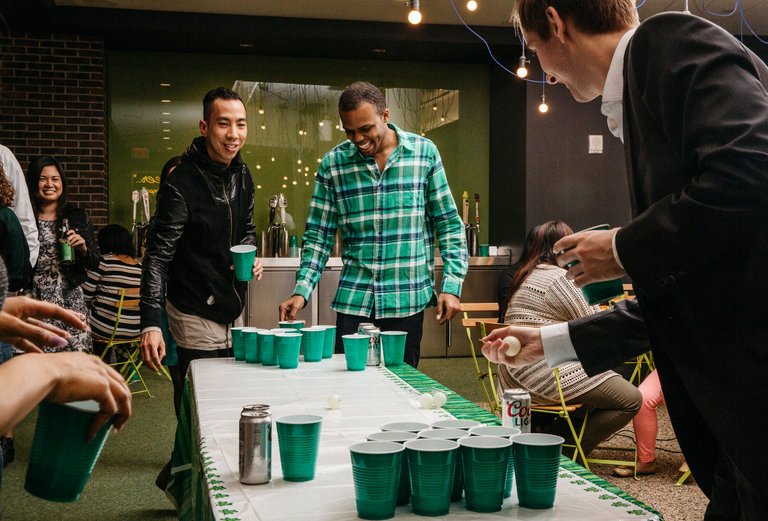 At the headquarters of the McCann agency in Manhattan, the battle for the future of the advertising industry is being waged with piped-in electronic music and employee-brewed beer.

Young professionals, balancing Apple laptops on their knees, drape themselves over space-age chairs near a cafe that sells fresh juice and subsidized snacks. On one floor, plants cover walls, making the office look like a jungle. Elsewhere is a Ping-Pong table.

The young and the creative have been the engine that drove the advertising industry for decades. But those who once flocked to the business with dreams of making the next standout television commercial are no longer drawn to the industry in the same way. Some view advertising as stodgy — who wants to make a 30-second TV commercial when everyone they know is cutting the cord? — and some are lured by the riches and prestige of the technology industry.

The result is that even storied agencies like McCann, which has produced campaigns such as the 1971 “Hilltop” ad for Coca-Cola, now find themselves desperate for young people at the moment when the traditional advertising industry is struggling as never before to adapt to a changing media landscape that these same young people are shaping.

To enhance their appeal, many agencies are trying to make themselves look less like Madison Avenue and more like the start-ups and tech companies that are now dipping into the same talent pool. Cue the employee happy hours, table tennis and free snacks. But the advertising industry faces much deeper issues that cannot be fixed with cosmetic changes.

Cool new technologies like virtual reality have imperiled the art of the television commercial, which is still, in many ways, the bread and butter of advertising agencies. The proliferation of online ads has made advertising anathema. And money provides little incentive: Last year, the average salary for entry-level employees at agencies was about $35,500, according to the 4A’s, an industry trade group. About 25 percent of the industry makes less than $50,400 a year.

Perhaps just as important, the advertising industry seems unable to shake the perception that it is stuck in the past. In a recent lawsuit that has shaken up the business, a woman accused the chief executive of J. Walter Thompson, one of the oldest agencies in the world, of rampant racist and sexist behavior, describing comments and scenes that seemed straight out of the 1960s “Mad Men” era. The lawsuit has raised questions about gender and racial diversity and has prompted the industry to acknowledge longstanding problems with its culture.

Even as many agency executives insist that their companies are still the best place for creative minds to shine, they are finding it more difficult to maintain their ranks. Turnover at advertising agencies is higher than in competitive industries like technology and management consulting, and the gap increased 10 percent in the last year, according to a study from LinkedIn and the 4A’s.

A lot is at stake: If agencies cannot recruit and retain top young talent, the craft of traditional advertising — an important part of culture for better or worse — could disappear.

“We have to fill the pipeline with young talent,” said Tony Weisman, chief executive in North America for the agency DigitasLBi. If agencies fail to recruit and keep top young employees, he said, “We’re going to become archaic.”

Losing young talent is a problem other industries face as well. Established news organizations are losing people to relatively new outfits like Vice and BuzzFeed. Investment banks like Goldman Sachs and Bank of America have made sweeping changes to their junior-banker programs in part because ambitious college graduates were turning to Silicon Valley.

But while Wall Street can match the pay at places like Google and Facebook, advertising agencies cannot. So instead, they are trying to match some of the perks.

The creative agency Deutsch offers free snacks and a barista at its New York office and free lunch at its Los Angeles office, moves that Mike Sheldon, the agency’s chief executive in North America, said were modeled after Google. The agency also provides yoga classes, boot camp workout classes and wine tastings. The agency Ogilvy & Mather has beers on the first Friday of every month. McCann allows employees to brew their own beer that is then named after clients. One, named for the military contractor Lockheed Martin, is called Stealth Stout.

Some agencies are also revamping their offices to look more like start-ups, with open seating plans and plush chairs. The agency BBDO has created a separate space in its New York office, called Xlab, where restless minds can experiment with virtual reality and drones. (In a bit of a twist, BBDO also happens to be behind the General Electric campaign aimed at getting young people to work for the company.)

To reinforce that advertising is an actual career rather than a consolation prize or a steppingstone to something better, agencies like Ogilvy & Mather, Deutsch, Droga5 and DigitasLBi are also bolstering their training and mentorship programs.

The changes are geared toward attracting and retaining people like Allan Holmes, 29, who joined the agency Leo Burnett in Chicago after graduating from the Savannah College of Art and Design in 2011, but now works at Facebook’s Creative Shop, the company’s in-house agency. He said he was attracted to Facebook, which he joined roughly two years ago, because it had the “same sort of energy” as a start-up. And what got him most excited initially, he said, was his personal connection to the company — he met his girlfriend and best friend on social media. “The platforms mean everything,” he said. “They’re extremely important.”

In the end, perks may do little to combat the advertising industry’s loss of cachet.

“People no longer have that innate desire and that instinctive desire to be in our business,” said Jay Haines, a founder of Grace Blue, a search firm that works with the advertising industry.

But that does not mean the advertising agencies are going to stop trying.

At IPG Mediabrands — like McCann, a part of Interpublic Group, one of the biggest ad holding companies — the pop hits were already cranked way up on a recent morning. Young employees waited at a coffee bar for lattes and gluten-free pastries. A sign indicated a beer garden. Another, in blue tiles, spelled out “Initiative.”

“We’ve gone out of our way to make it really comfortable, really cool,” said Henry Tajer, the agency’s global chief executive, as he considered the scene from a conference room. “It’s a day club.”

The advertising industry can only hope it is not too late to the party.